Read the statements below and agree or disagree with each of them, using the appropriate agreement or disagreement phrases from the previous lesson. Try to give a reason for your opinion, especially when you disagree: 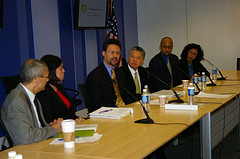 Do politicians always speak in a comprehensible way? Is it easy to understand their message? Why or why not?

For a politician, there is no such thing as a fortunate metaphor. For one thing, metaphors create images, and images are land mines. A politician who uses even a perfect metaphor is asking for a good deal of trouble because, if his judgement is wrong, people will not forget his imagery, nor will they let him forget it. A politician who uses a metaphor ineptly is in worse trouble still, because he will be remembered for being both vivid and confused.
Of course, there have been a few truly sublime metaphors in political history, like Lincoln’s “house divided”. Mao Tse-tung once said: “A revolution is not the same as inviting people to dinner,” which is unarguable. On the whole, however, politicians have lost a lot more than they have gained by reaching for poetry.
Here the subject is horses, which are metaphors of another colour. In the Atlantic Monthly article, Mr. Stockman called the Reagan tax package a “Trojan horse” in order to indicate that what looked on the surface like a fascinating gift to the people in fact contained the instruments of their destruction. But clearly that was not what Mr. Stockman meant, since the tax package – if it was a deception – was designed to destroy only some of the people, i.e. the poor. For the rich, the gift would be genuine. If, by using Troy, Mr. Stockman wished to convey the idea that the Reagan bill was a pig in a poke, he was backing the wrong horse.
But the question is: Would any metaphor have served Mr. Stockman’s purpose? A stalking horse, perhaps – the animal that allowed a hunter to hide beneath its belly until he could get close to his quarry. But it would be more than Mr. Stockman intended to suggest that the tax bill was an accomplice to those seeking to devour the people. A snake in the grass, then? No, because a snake would be immediately recognisable as an enemy. Nor could the tax package be described as a fox in a hen-house, a dog in a manger, a bull in a china shop. A wolf in sheep’s clothing comes close. A horse in sheep’s clothing is closer, if uncomfortable for the horse.
What all this comes to, oddly, is that Mr. Stockman not only ought to have kept clear of metaphors, but would have saved himself a great deal of grief by using the familiar economists’ talk that has effectively mesmerised the world for years. In the Atlantic, Mr. Stockman speaks of “mismanagement modality” and the wrong atmospherics.” Stick to that sort of language, and you cannot lose. In a way, Mr. Stockman is paying the penalty for wishing to sound more comprehensible, which seems unfair, but it is, in his own words, how the world works. The danger of being comprehensible is that people will understand you.

Newspaper headlines have a special role – they are to encourage you to read an article. They have to be rather short (headlines that are too long will probably discourage the reader) and informative at the same time (i.e. giving you a certain idea what the article is about). Look at the headlines below and try to predict what each article is about. Then check your predictions:

Brief summaries of the articles:

Additional task:
Try your hand at article writing! Think of a topic and give your story a good title. Then write a brief summary of the article – you may want to write the whole article!