The Golden Gate Bridge is San Francisco’s most famous tourist attraction. See if you can guess the figures in the quiz below:

San Francisco is considered by many to be the most beautiful city in the United States. This relatively small city is located on steep hills overlooking the San Francisco Bay. The views of the city, the bridges and the bay are stunning. The city is famous for its lively nightlife and excellent food. Many festivals take place in San Francisco, especially in the fall. Unlike many American cities, San Francisco can be explored on foot.

Unlike the rest of California, San Francisco does not get very hot weather. The temperatures rarely rise above 21 C. The wind can be quite cold. The city is very often enveloped in fog.

San Francisco is most popular with travelers during the summer. To avoid the peak of the tourist season, visit the city in September or later.

Here are some notes on three tourist attractions in San Francisco, taken from the “Lonely Planet” website [(http://www.lonelyplanet.com/worldguide/)] 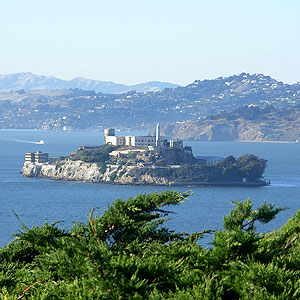 The most infamous prison in the US sits on an island in the middle of San Francisco Bay. A derelict military institution in the 1920s, it became 'The Rock', a maximum-security prison housing America's most wanted, including Al Capone. It closed for business in 1962, but with so many stories and mysteries, it's a magnet for tourists.

The 210ft (60m) high, concrete Coit Tower crowns the top of Telegraph Hill and is a monument to the firefighters of San Francisco. It has views from the Golden Gate to the Bay Bridge, and a sensational view of the slopes of Nob Hill and Russian Hill as they fall into North Beach. The interior is decorated with beautiful 1930s frescoes. Hours: 10:00am-6:00pm

Cable Cars - The Joy of 9mph

Cable cars make the everyday getting around the city fun. From the standing room along the sides the world slides by at 9mph as your wooden car climbs up and down the hills above the heart of town. There's fresh air, water views, the sounds of cables and bells, and the smell of burning pine (they use wooden blocks for brakes).

Imagine you are in San Francisco and have the time for only one tourist attraction: the Golden Gate Bridge, the Coit Tower or Alcatraz. Write two or three sentences about your choice and the reasons for it.

For example: I’m going to Alcatraz because...

Now imagine you want to go abroad with your friends. You have not yet decided where to go. Think of a possible place and look it up on the internet. Try to find some English-language websites about the place. Don’t worry if you don’t understand everything.

You can go to the Rough Guide website: [(http://travel.roughguides.com/roughguides.html)]

Then write an email message to your friends telling them about the place of your choice and the reasons why you should all go there. Word limit: 150 words.

Hello Everyone, I have an idea about the place for our trip this summer. How would you like to go to Dublin? We can buy plane tickets from cheap airlines, so flying will not be very expensive. There are plenty of things to see there, for example .....