Now read more about them and answer the questions below. 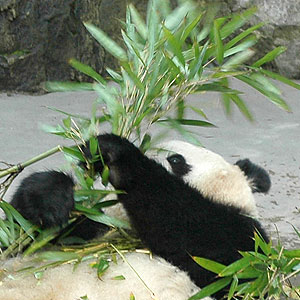 From our start in 1961, WWF has worked to protect endangered species. We're ensuring that the world our children inherit will be home to elephants [1], tigers [2], giant pandas [3] , whales [4] and other wildlife species, as well as people.

WWF safeguards hundreds of species around the world, but we focus special attention on our flagship species: giant pandas, tigers, endangered whales and dolphins, rhinos, elephants, marine turtles and great apes. These species not only need special measures and extra protection in order to survive, they also serve as umbrella species: helping them helps numerous other species that live in the same habitats.

In addition to our flagship animals, we work to protect numerous species in peril around the world that live within our priority ecoregions. Large predators like snow leopards and grizzly bears, migratory species like whooping cranes and songbirds, and a host of other species facing threats also benefit from WWF's conservation efforts. Our wildlife trade experts at TRAFFIC work to ensure that trade in wildlife products doesn't harm a species, while also fighting against illegal and unsustainable trade.

WWF is known for acting on sound science. Science leads and guides our strategies and approaches, from the best way to restore tigers in viable, breeding populations to deciding which areas need protection the most.

1. To safeguard a species means

to protect it. Dobrze

2. Their flagship species are those that are

the most important. Dobrze

3. Some species are called umbrella species

because they represent a larger group of animals. Dobrze

because they need special protection. Źle

because they live in rainy areas. Źle

5. Their priority ecoregions are those that are

the most important. Dobrze

Imagine you work for a college magazine and in their special issue called “The World of Nature” they want to present some information on international organizations helping endangered species. They’ve asked you to write a short report on World Wildlife Fund. Look at the their website [5] to find out more about them, decide what is most important or interesting for your readers and write a short report (200 words) in which you present that information. Use your own words.

Here are some phrases you may use.