Look at the picture and the(q2) title of the text below. What do you think the text is about? 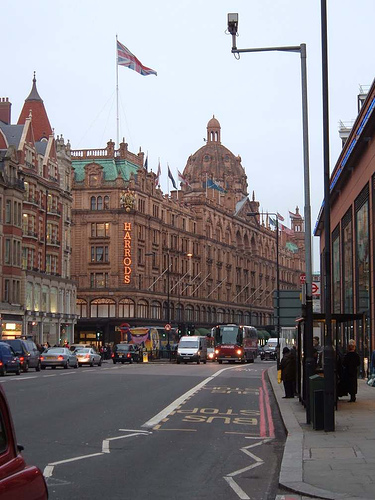 the popularity of English Źle

HOW NOT TO BE AN ALIEN

1. Some years ago, I spent a lot of time with a young lady who was very proud of being English. Once she asked me - to my great surprise - whether I would marry her. "No," I replied, "I will not. My mother would never agree to me marrying a foreigner." She looked at me a little surprised, and said: "I, a foreigner? What a silly thing to say. I am English. You are the foreigner. And your mother, too." I did not give in. "In Budapest, too?" I asked her. "Everywhere," she declared with determination. "Truth does not depend on geography. What is true in England is also true in Hungary and in North Borneo and Venezuela and everywhere." I was suprised and upset.

2. On Sundays on the Continent, even the poorest person puts on his best suit, tries to look elegant, while in England, even the richest person or motor-manufacturer dresses in some peculiar rags and does not shave. On the Continent, there is one topic which should be avoided - the weather; while in England, if you do not repeat the phrase "Lovely day, isn't it?" at least two hundred times a day, you are considered a bit dull. On the Continent, Sunday papers appear on Monday; whereas in England - a country of exotic differences - they appear on Sunday. Many continentals think life is a game; whereas the English think cricket is a game.

3. On the Continent, you would describe someone discussing the weather as dull, while inEngland, this is an ever-interesting, even thrilling topic, and you must be good at discussing it. You must never contradict anybody when discussing the weather. If someone says: "Nice day, isn't it?" - answer without hesitation: "Yes, isn’t it lovely?"

4. On the Continent, you find people who sigh deeply for no reason, and who suffer and look up into the air extremely sadly. This is an expression of their soul. They may say things like this: "Sometimes I am so merry and sometimes I am so sad." All this is very deep: and just an expression of their soul, nothing else. In contrast, the English have no soul; they have the understatement instead. If a continental youth wants to declare his love to a girl, he tells her on his knees that she is the sweetest, most charming person in the world, and that he would be unable to live one more minute without her. In contrast, in England, the boy says softly: "I don't object to you, you know." If he is quite mad with passion, he may add: "I rather fancy you, in fact." If he wants to marry a girl he says: "I say ... would you? ..."

5. British scientists put their heads together, and made complicated biological experiments to find a way of spoiling it. They suggested that if you do not drink it clear, or with lemon or rum and sugar, but pour a few drops of cold milk into it, and no sugar at all, the desired object is achieved. Once this refreshing, aromatic, oriental beverage was successfully transformed into colourless and tasteless water, it suddenly became the national drink of Great Britain and Ireland. There are some occasions when you must not refuse a cup of tea, otherwise you will beconsidered an exotic and barbarous bird without any hope of ever being able to take your place in civilised society.

How to write a story?

Put the paragraphs in the right order to make a story:

A.Then, in April he received another bill and threw that one away too. The following month, the credit card company sent him a note stating that they were going to cancel his card if he didn't send them $0.00 by post.

B. Finally, the man decided to play the company at their own game and mailed them a cheque for $0.00. The computer processed it to his account and displayed the information that he owed the company nothing at all.

C. When he called the credit card company, they apologized for the computer error and said that they would take care of it. The next day, he got a bill for $0.00 stating that payment was now overdue.

D. In March 1992, a man from Newton near Boston Massachusetts received a bill for his unused credit card that said that he owed $0.00. At first, he couldn't believe it, but he ignored it and threw it away after a while.

E. After he had spoken to the company a day earlier, he thought the latest bill was another mistake and ignored it, because he trusted the company that they would solve the problem.

F. At that moment, the man lost his trust in modern technology. Before that, he had wanted to buy his wife a computer for her birthday. Eventually, he decided to buy a typewriter instead.

G. The next month he got a bill for $0.00 stating that he had 10 days to pay his account or the company would have to take steps to retrieve the debt.

H. A week later, the man's bank called him asking him what he was doing writing a cheque for $0.00. After a long and complicated explanation, the bank replied that, because of the $0.00 cheque, their software had suddenly broke down . The bank could not accept ANY cheques from ANY of their customers that day, because the cheque for $0.00 had damaged the computer system.

I. Soon after, the man received a letter from the credit card company saying that his cheque had not been accepted and that he now owed them $0.00, and unless he sent a cheque by post they would be taking steps to retrieve the debt.

What Makes the British Laugh?

You can also watch a Monty Python video : The Fish Slapping Dance and The Spanish inquisition on http:// intriguing.com/mp/video.asp