Read the text Signs of Success, and explain what is meant by “the success”.

Just as biologists rarely see a new species arise, linguists rarely see a new language being born. You have to be in the right place at the right time, which, usually, you are not. However, the past few decades have seen an exception. Linguists have been able to follow the formation of a new language in Nicaragua. The catch is that it is not a spoken language but, rather, a sign language which has arisen spontaneously in deaf children. Ann Senghas, of Columbia University, in New York, one of the linguists who has been studying this language, told the AAAS conference in Seattle about her discoveries. And Susan Goldin-Meadow, of the University of Chicago, who studies the spontaneous emergence of signing in deaf children, filled in the background by showing how such children use hand signals in a different way from everybody else.
The thing that makes language different from other means of communication is that it is made of units that can be combined in different orders to create different meanings. In a spoken language, these units are words. In a sign language, these units are gestures. Dr Senghas has been studying the way these gestures have evolved in Nicaraguan Sign Language (NSL). The language emerged in the late 1970s, at a new school for deaf children. Initially, the children were instructed by teachers who could hear. No one taught them how to sign; they simply worked it out for themselves. By conducting experiments on people who attended the school at various points in its history, Dr Senghas has shown how NSL has become more sophisticated over time. For example, concepts that an older signer uses a single sign for, such as rolling and falling, have been unpacked into separate signs by the youngsters.
Early users, too, did not develop a way of distinguishing left from right. Dr Senghas showed this by asking signers of different ages to converse about a set of photographs that each could see. One signer had to pick a photograph and describe it. The other had to guess which photograph was being described.
When all the photographs contained the same elements, merely arranged differently, older people, who had learned the early form of the language, could neither signal which photo they meant, nor understand the signals of their younger partners. Nor could their younger partners teach them the signs that indicate left and right. The older people clearly understood the concept of left and right, they just could not converse about it—a result that bears on the vexing question of how much language merely reflects the way the brain thinks about the world, and how much it actually shapes such thinking.
For a sign language to emerge spontaneously, though, deaf children must have some inherent tendency to tie gestures to meaning. Spoken language, of course, is frequently accompanied by gestures. However, as a young researcher, Dr Goldin-Meadow suspected that deaf children use gestures differently from those who can hear. In a 30-year-long project carried out on deaf children in America and Taiwan, whose parents can hear normally, she has shown that this is true.
Even deaf children who have no deaf acquaintances use signs as words. The order the signs come in is important. It is also different from the order of words in both English and Chinese. However, it is the same, for a given set of signs and meanings, in both America and Taiwan.
Curiously enough, the signs produced by children in Spain and Turkey, whom Dr Goldin-Meadow is also studying, while similar to each other, differ from those that American and Taiwanese children produce. Dr Goldin-Meadow is not certain why that is. However, the key commonality is that their spontaneously created languages resemble fully-formed languages.
This result, if confirmed in other studies, could have profound implications. Another much-argued question in linguistics is whether there is some sort of grammatical template that acts as part of a language instinct and is wired into the brains of new-born children. Such a template would help a child to learn a language quickly. However,the different grammars of actual languages suggest it cannot, assuming that it does exist, be imposing itself too strongly. In spite of this, the sign languages of Dr Goldin-Meadow's children are entirely self-invented. If there is a deep structure, they are surely drawing on it directly. The order of their signs may, thus, be a direct reflection of what that structure is.
For now, Dr Goldin-Meadow is cautious. However, it may turn out that the truth comes not out of the mouths of babes and sucklings, but from their hands.
From: The Economist print edition Feb 19th 2004 | SEATTLE www.theeconomist.com


The word “success” is in the title because ….
In your own words, write down your answer:

Answer: The sign language observation can contribute to solving the question of language origin.

Writing a letter of apology


General Letter of Complaint
[Your address 1]


[Postcode]
[Other contact details you may wish to give: phone number, e-mail etc.]
[Date]


Dear [Contact Person or Customer Service Manager],
On [date], I [bought, rented, had serviced etc] a [name of product with model number, service performed etc] at [location and other details of the transaction].
I am disappointed because your [product, service, billing etc.] has [not performed as it should, was wrong etc] because [state the problem as you understand it giving as much detail as possible].
To resolve the problem I would appreciate if you could/would [state the action you require e.g. a refund, service performed again etc.]. Enclosed is a copy/are copies of the [receipt, contract etc.].
I look forward to hearing from you and to a resolution of this problem. I will wait for [set a time limit] before seeking help from [the Trading Standards, a consumer group, solicitor etc. (details of the relevant authorities)]. Please contact me at the above address or by phone [give numbers].
Yours sincerely.
[Signature]


[Print Your Name]
Enclosures: [state the names of any documents you have enclosed]
Cc: (Include Name, Company if you want to send a copy of this letter to someone else)

You are working for an internet shop. Your customer did not get his/her books on time. Write an appropriate letter of apology. Use some of the tips above. Bring the text to class.

Think about the following topics and bring your ideas to the next lesson: 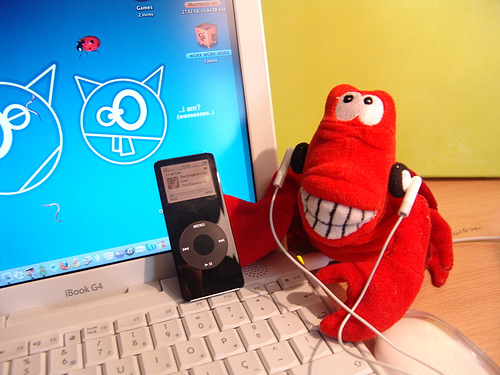 
Study the following words before you read the text: embedded - placed
wristband – a form of band that goes around your wrist
retrieval - the process of getting information back when it is lost
prototype – a model


Read the following text and find out what was revolutionary about the invention described. How many different applications can you report?


HP announced that its researchers have developed a miniature wireless data chip that could provide broad access to digital content in the physical world. With no equal in terms of its combination of size, memory capacity and data access speed, the tiny chip could be stuck on or embedded in almost any object and make available information and content now found mostly on electronic devices or the Internet.


Some of the potential applications include storing medical records on a hospital patient's wristband; providing audio-visual supplements to postcards and photos; helping to fight counterfeiting in the pharmaceutical industry; adding security to identity cards and passports; and supplying additional information for printed documents.


The experimental chip, developed by the "Memory Spot" research team at HP Labs, is a memory device based on CMOS (a widely used, low-power, integrated circuit design), and is about the size of a grain of rice or smaller (2 mm to 4 mm square), with a built-in antenna. The chips could be embedded in a sheet of paper or stuck to any surface, and could eventually be available in a booklet as self-adhesive dots.


"The Memory Spot chip frees digital content from the electronic world of the PC and the Internet, and arranges it all around us in our physical world," said Ed McDonnell, Memory Spot project manager, HP Labs.


The chip has a 10 megabits-per-second data transfer rate -- 10 times faster than Bluetooth(TM) wireless technology and comparable to Wi-Fi speeds -- effectively giving users instant retrieval of information in audio, video, photo or document form. With a storage capacity ranging from 256 kilobits to 4 megabits in working prototypes, it could store a very short video clip, several images or dozens of pages of text. Future versions could have larger capacities.


Information can be accessed by a read-write device that could be incorporated into a cell phone, PDA, camera, printer or other implements. To access information, the read-write device is positioned closely over the chip, which is then powered so that the stored data is transferred instantly to the display of the phone, camera or PDA or printed out by the printer. Users could also add information to the chip using the various devices.


"We are actively exploring a range of exciting new applications for Memory Spot chips and believe the technology could have a significant impact on our consumer businesses, from printing to imaging, as well as providing solutions in a number of vertical markets," said Howard Taub, HP vice-president and associate director, HP Labs.


The chip incorporates a built-in antenna and is completely self-contained, with no need for a battery or external electronics. It receives power through inductive coupling from a special read-write device, which can then extract content from the memory on the chip. Inductive coupling is the transfer of energy from one circuit component to another through a shared electromagnetic field. A change in current flow through one device induces current flow in the other device.


Memory Spot chips have numerous possible consumer and business-based applications. Some examples are:


-- An audio photo: Attach a chip to the prints of photographs and add music, commentary or ambient sound to enhance the enjoyment of viewing photos.


-- Digital postcards: Send a traditional holiday postcard to family and friends with a chip containing digital pictures of a vacation, plus sounds and even video clips.


-- Document notes: A Memory Spot chip attached to a paper document can include a history of all the corrections and additions made to the text, as well as voice notes and graphical images.


-- Perfect photocopies: A Memory Spot chip attached to a cover sheet eliminates the need to copy the original document. Just read the perfect digital version into the photocopier and the result will be sharp output every time, no matter how many copies are needed, and avoiding any possibility of the originals jamming in the feeder.


-- Security passes: Add a chip to an identity card or security pass for the best of both worlds -- a handy card with secure, relevant digital information included.


-- Anti-counterfeit tags: Counterfeit drugs are a significant problem globally. Memory Spot chips can contain secure information about the manufacture and quality of pharmaceuticals. When added to a drug container, this can prove their authenticity. A similar process could be used to verify high-value engineering and aviation components.