Look at the title of the lesson, and think of 15 words and phrases which you are likely to find in the passage below:

Now read the text and check how many of the words you’ve thought of are actually there:

Not so long ago, celebrations across the USA marked the 100th birthday of comedy legend Bob Hope. The BBC asked experts on ageing about the prospects for the rest of us reaching that milestone.

Who wants to live forever? If surveys are to be believed, many of us harbour a secret desire to cheat the Grim Reaper into our 100s. Average life expectancy in the UK is already well in excess of the "three score years and ten" to which the Bible says we are entitled. And scientists across the world are trying to find out what biological processes drag us into old age, and, perhaps, to find ways of reversing the latter in the future. The only method that has clearly been shown to increase the lifespan of animals is one which involves some tough lifestyle choices. The trick here is to eat only 60% of the calories that would normally be recommended. Dr Richard Faragher, an expert in ageing biology from Brighton University, told BBC News Online: "Even if you didn't live longer, it would certainly feel like it."

The only thing that is clear, however, is exactly how complex the science of ageing is, and how little we currently understand about the nuts and bolts of growing old. The established view is that ageing happens when the body loses the ability to repair itself, and the cumulative damage leads to both the gradual decline in mind and body which dog the elderly - as well as more serious illnesses which are potentially fatal. The theory is that the lifespan of any creature is set by evolution - and involves a balancing act between survival and reproduction. The more energy that has to be expended by the body to produce offspring, the less there is available for the repair process. And the bad news, according to Dr Faragher, is that the human lifespan has not changed for centuries. "Human lifespan has not altered as long as humans have been around - what has changed is life expectancy. In 1800, in the UK, it was about 30 - now it is 75 years or more."

Unfortunately, he says, all humans are not born equal when it comes to potential lifespan. At the moment of your conception, the set of genes you inherit from your parents has a big say in how long you will live. Bob Hope's own father died a day short of his own 100th birthday. And even in the nine months prior to birth, what your mother does could be shortening your life - while a lifetime of smoking, drinking and eating badly raises the odds of an early demise quite significantly. "You can get a good hand of cards that will mean you could live a certain period of time," said”, Dr Faragher. "But you could shorten that period by living on an exclusive diet of vindaloo." What it means is that quite a few of us have no chance of matching Bob Hope - even if we live like saints from now on. "The best way to match Bob Hope, quite frankly, is to have Bob Hope's parents, and live a life that is the same or better than his," says Dr Faragher.

We do, however, have one crucial advantage over the veteran comic. In 1903, medical science was primitive compared with today - Hope was born decades before the discovery of penicillin. It is impossible to predict what advances in cancer, cardiac and geriatric medicine will have arrived in 60 years time to help us get closer to our personal maximum lifespan. However, some scientists believe that it may be possible to find ways to push back this limit. They are starting to discover the genes which appear to be involved, in some way, in the ageing process - and are hopeful this will point them towards targets for drugs to alter this. Scientists in Italy are using information from the human genome and samples from volunteer centenarians to see how they differ from the rest of us. And the analysis of people with a condition called Werner's syndrome - which causes premature ageing – has also yielded clues. Dr Dominic Withers, from University College London, told BBC News Online: "It's extraordinarily complex, but there is evidence coming through from these lower organisms that suggests that one day we may be able to prolong life. "We have just opened the box - and now we are peering in." Dr Faragher said: "People have managed to produce a lifespan extension of as much as 100% in worms - it must be possible to increase lifespan in humans."

At present, however, there's no way that someone can reliably boost their lifespan to match the genetic superiority of Bob Hope. However, for those prepared to think more radically, there may be a solution. A company in the US offers customers the chance to be "cryonically" preserved after their deaths - frozen, in other words - to be reawakened in a few decades time when medicine can cure their ills and make them young again. For a mere $125,000 a whole body can be preserved, while those on a tighter budget can gamble on the future of robotics by storing only their head at less than half this cost. Growing old gracefully is not an option these days.

Find the words and phrases in the text that have the following meanings:

THE MOST MEMORABLE DAY IN MY LIFE

Writing a narrative A narrative is a story or a description of a series of events. A good narrative should contain an:

A Brush with Fame At the time of the 2nd World War, I was working as a delivery boy, age 13, as was allowed during the war, for a Baker's Company called Scotts Bakery in High Craighall Road (by the way, this was also the street where my first ever love lived). Now part of our delivery sometimes was to Abbotsinch Airport. The cookhouse was manned entirely by black American Air Force personnel. This was the first time in my life that I had ever met a black person.
After making my deliveries of bread, I was standing looking around when I was lifted bodily by a giant of a man. An American sergeant. I was so small, he simply lifted me and put me on a table like a doll. Then he shook my hand and gave me some chocolate with a big smile and off he went. I was amazed at the size of him so I asked some of the other Airmen who he was. They looked at me as if I was mad. 'Sonny' one of them said. 'Don't you recognise him? He is the Heavyweight Champion of the World, that is the great Joe Louis himself, the Brown Bomber'.
I had seen him a few times on the newsreels and all I knew was he was big and he was black. I got home and told all my pals 'I have just shook the hand of Joe Louis himself' and I didn't wash my hand for days.
Now I am not exactly sure to this day whether or not it really was the great man himself or if the rest of the black men were fooling me. But I don't care. I have made myself believe it all these years, and I still firmly believe I shook the hand of the greatest boxer in the world - Joe Louis in person.

-Which tense/tenses was/were used to set the scene?

Past Continuous and Simple Past

-Which tense/tenses was/were used to describe the feelings/reactions in the final paragraph?

Now think of some memorable event, and write a short narrative about it, using the tips from the lesson. Do not exceed 200 words. Be prepared to present your composition to the class during the lesson with your teacher: 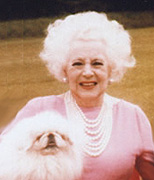 Who do you think this lady was?

Read the short text about Barbara Cartland to learn more about this interesting person, paying special attention to the highlighted words:


Barbara Cartland was the most prolific author of the 20th century, known primarily for her romance novels. For most of her lifetime, she wrote 10 books a year. Her skill was in old-fashioned, straightforward romance, a formula that proved astonishingly popular, particularly in the USA. Her books sold around 1 billion copies, and were translated into 36 languages. Her high-profile in England, France and the United States, between the 1970s and 1990s, was aided greatly through her frequent appearance on TV talk shows. Her daughter's social success, which repeated and surpassed her own, also brought her added attention. Raine's marriage to the Earl of Dartmouth, however, ended in divorce, and she remarried in 1976 to the Earl Spencer, whose children included the future Diana, Princess of Wales. When she was aged 77, and demand was much greater than supply, her publishers asked her to work a little harder. For the next 20 years, she doubled her output to nearly one book a fortnight.
One of her last projects was the launching of her website in early 2000. At that time, her publishers estimated that since her writing career began in 1923, Dame Barbara Cartland had produced a total of 724 titles. She was a charming, feisty 98 years of age when she died.

This is a review of one of Barbara Cartland’s numerous novels. Do you think you would enjoy reading it?

THE CROSS OF LOVE by Barbara Cartland


This is the first of 160 unpublished manuscripts left by the late author that's to be released posthumously as the Barbara Cartland Pink Collection. Cartland's well-crafted little gems of traditional Regency romance, traditional values and traditional young ladies promise pleasant reading.


Rena Colwell, the daughter of a recently deceased vicar, has no place to go and no income. She visits the upright of an ancient cross to pray and finds three obviously old gold coins. Though she's tempted to keep them, she returns them to their rightful owner, a new earl.


John Relton, now Lord Lansdale, was a distant relative of the last earl and is surprised to inherit the poverty-stricken title and rundown property. Immediately attracted to Rena, he consents to hire her as housekeeper.


Rena displays a bit more spice than Cartland's earlier heroines, but her rebellion against convention is still gentle, certainly traditionally moral. John is the perfect gentleman. Cartland's usual theme of the triumph of good over evil is aided by a strong villain—a sinister railroad magnate determined to marry his daughter to a title. There's a mild suggestion of the paranormal, but true to her form, Cartland gives it a plausible reason for being. Altogether, light, quick reading that's especially good for the younger teens too.
—Gerry Benninger http://www.romantictimes.com/books_review.php?book=24666